I recently updated my iPods operating system to the new OS 4.0 and I have only one word to say…..UGH!!!!

The premise for the software upgrade is great, you will now be able to run several apps at the same time, one in the foreground and others in background, which could not happen with the old OS.  The issue is, previously when your iPod went into rest mode the battery life was fantastic, the iPod “slept” and the battery was not affected.  Now I have to re-teach myself a entirely new method of iPod upkeep.

Previously, I could just tap the “home” button, see yellow arrow in image below, to jump out of one app then choose another I would like to use.  I did not have to formally close the application I was using. 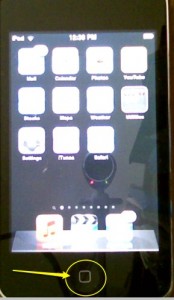 The new software allows for apps to continue which means, even in “sleep” mode the iPods runs, thus draining the batteries.  At the KTI Summit last week, I discussed the issue with Dianne Krause, another iPod/iPhone guru and she assured me that others are having the same issue.  It was nice to know that it was not something stupid I was doing or that my iPod suddenly was having critical issues that were going to shorten its effective life span.

My short term fix to address this issue is to completely shut down the iPod when I am not using it, instead of letting it go to “sleep.”  I used this strategy for the last week or so and it works. The power button is on the image below, a pink arrow is pointing to it.

The pink arrow is pointing to the power button.

You may say, “So, what’s the big deal Einstein?”  Well, the big deal is, I have to manage iPods on a classroom scale, a cart of 25 which may be used 6 periods a day this upcoming year.  I need to find a stable process to keep the iPods charged and usable for every period.  I proved last year that once you ingrain a technology into your classroom culture, everyone becomes extremely dependent on it.

The long term fix is going to teach my students and myself to formally close out of each app after we are done using it.  After almost a year and a half of use, it will take some time to adjust.  I am hoping that by combining the two fixes I will have a system in place to keep the iPods consistently functioning and reliable for the upcoming school year.

Minor changes like this keeps my understanding of the need to constantly adapt clear.  It also lets me understand why others in education may be weary or leery of making the leap into technology with their students.  Change can be nerve-wracking, I am adapting well with technology, just please don’t ask me to change my pizza toppings.