Yesterday, September 10, 2010, I updated iTunes on my Macbook and started pushing out the update to my classroom iPods. It seemed like no big deal, I was in a hurry so I did not read about the new update, a big mistake on my part. If I would have taken the time to read over what was new with the update, I would have saved myself a lot of stress.

It was just a bit hectic, which is not an excuse, just how my day was going. I had students coming into my homeroom for extra help, when I began updating the iPods, then we jumped into first period. I had a couple of students come into my class second period during my planning time, but I kept updating the iPods in the cart. @bpasquale from twitter was in my room, we were planning out the scavenger hunt our Freshmen will be doing in the next couple of weeks, so I was not very focused.

By fifth period, I had a number of iPods updated and the students were finishing up their blog assignment. That is when one of my students showed me an app that they thought shouldn’t be on the iPod. I have been asking them to keep track of content on them and let me know if they find things on the iPods that should not be there. The app was a game app and my iTunes account ID was in the log in screen, (See image below). 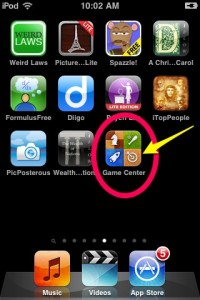 Highlighted by circle and arrow.

I could not delete the app, either by holding my finger on the screen to make it deletable (sic), or by going back into iTunes and pulling the app off of the iPod.  I asked several students to double check my process and they siad i was going about the delete process correctly.  Around this time, I was denied access to the iTunes Store, which added to my concern.  I logged out of iTunes and tried to sign back in, when I received a message that my log in was shut off for security reasons…so someone had tried to log in to my account…my blood pressure was rising.  As I double checked which students had access to the iPod in question, I was bothered by the fact that none of the students who had that iPod seemed like the type of person who would try and hack into my account.  I pulled the iPod in question out of class access and focused on the last two classes before lunch.

In the moment I did not think to ask if anyone else had that app on their iPod, which was another mistake.  By asking the students that question I would have seen the multiple apps and known it was not a single student issue, but something much different and less troublesome.  I chose to not bring attention to the issue with students, reverting to I am the boss and” know it all” of the room, ugh.

At lunch I found out that the school web filter was adjusted, political correct terms meaning locked down, so that was probably the cause of getting bounced from the iTunes Store.  No more updates would happen today, software updates need access to the iTunes Store, not just the controlling laptop.

My period 8 Freshmen were working on their blog posts, when I decided to ask one of my super tech proficient students for assistance.  I explained what was going on and he quickly responded, “You can’t delete anything iTunes puts on your iPod.  Did you update to the new iTunes?  If they built the app into iTunes you can’t get rid of it unless you downgrade iTunes…”

His explanation continued, but I lost the words as I realized how much stress I had caused myself because I had reverted to “Master and pupil” mode when I encountered a possibly bad situation in class. I thanked him for the advice and finished out the day, in a much more relaxed state of being.

I can actually laugh about the entire situation now, especially since I can get back into my iTunes account and everything is okay.  I just need to remember that the students are partners in this iPod project and they sometimes know more about the iPods than I do.  There is no shame in admitting that and asking for their help when I encounter issues that are difficult to overcome.

As for Apple, thanks for forcing an app onto my iPod that I have no use for…but I will always remember to read the update details before pushing info out to my class iPods.